"My mission is to make politics a good word": "AAP" ka Prithvi Reddy

I instantly liked the way he introduced himself.

"I am a politician.  The reason I specifically mention this is it takes some time for me also to come to terms with politics, because we are brought up in a culture where and when students do something wrong or if a child gets into trouble, parents would say, 'You are good for nothing; join politics!’  Here is where it starts." 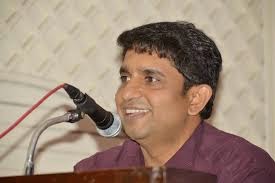 Don't read it wrong. A qualified mechanical engineer and social entrepreneur, Mr. Prithvi Reddy, a National Executive Member of the Aam Aadmi Party (AAP) also heads its panel on economic policy.   Mr. Reddy is the co-founder of "Smart Vote," a citizen’s initiative in Bangalore to make elections more meaningful and increase voter turnout by bringing in good candidates. He is one of the founders of "Corruption Saaku!" ("Enough of corruption!"), a citizen’s movement against corruption in Karnataka in November 2009, which later evolved to become the India Against Corruption (IAC), Karnataka Chapter.  As a member of the national core committee of IAC, Mr. Reddy worked closely with Anna Hazare, Justice Santosh Hegde, Arvind Kejriwal, Kiran Bedi, and others in steering the nationwide campaign against corruption.

"97 per cent of our nationalised banks' asset exposures are with 10 industrial houses.  We have Rs.690,000 crore in Non-Performing Assets (NPAs). Rs. One lakh crore has been recently written off.  Not a single rupee written off belonged to the aam aadmi. Loans written off didn't have any housing loan or education loan or vehicle loan.

"A few months before the Delhi elections, there was a sudden spurt in the price of onions, which went up from Rs.30 to close to Rs.100.  There was absolutely no shortage of onions at that time.  The onion trade in this country has been controlled by eight individuals in Maharashtra.  If you calculate what happened a few weeks before the Delhi polls, you will understand what I am trying to get at.  If we were to assume a difference of Rs.50 (the difference between Rs.30 and Rs.80) per kg for roughly about 12 lakh families, even if they had consumed one kg per week" about Rs.5,000 crores were collected, nay corrupted.

"If you would have noticed, just before elections, roads are relaid in Karnataka.  About Rs.450 crore has been spent in 8--12 weeks, all done without proper tender process, for not even one inch layering of the roads.  Why are we not questioning?" asked Mr. Prithvi Reddy while recently addressing a gathering of working journalists.

It dawned on me that an interaction with Mr. Reddy on common man politics would throw some valuable insights.

Why did he join AAP?  Mr. Reddy, who is also entrusted with building the party's base in Karnataka, was moved by the statement of a young Swedish parliamentarian, "I have a dream about society - how it needs to be; my country - how it should be; my world - how it should be".

AAP has been getting the support of the common man due to the anti-Congress or anti-corruption factor. Do you believe that this alone is enough to run a government?

Most problems relating to day-to-day sufferings of the common man are in some way or the other connected to corruption and bad governance. If in 5 years’ time we can eradicate corruption, this will give huge relief and progress to the common man.

Implementation of the 73rd and 74th amendment of our constitution in "true spirit" will help bring participative democracy wherein people have a say in matters relating to their everyday life. Vote for AAP such that we can give power back to the people.

Reforms:- Electoral , Judicial , Police , education and health are the salient features of our policy.

It is perceived that there is a difference between IAC (India Against Corruption) as a movement and AAP as a party.  How do you think AAP as a political outfit can be sustained?

We will always remain a people's movement, by and for the people. We have entered the political system only to bring about the changes we have been fighting for from the outside. Remember, we were mocked and told that laws are not made on the street or in maidaans, that we should enter politics and fight elections! We decided to take up the challenge!

What will be your party’s strategy in the event of a fractured mandate?

We will remain to be the common man's voice in parliament and set the agenda for change in the political system in our country.

Apart from fighting scams and scandals, what is your national agenda?

We believe and will strive to attain all the promises made in the preamble of our constitution.

AAP is an unconventional party wanting to do something good for the country but with the bulk of our people having a herd mentality, how do you plan to achieve your goals?

Winnability in elections until the recent Delhi verdict was defined by religion, caste, money, and muscle power, but the reality was that people never had a real alternative.  They had to choose between the "devil and the deep sea" or "the lesser of two evils," but the people of Delhi when offered an alternative--not just a substitute, chose wisely and gave us 28 seats.

Imagine you travel by a BMTC bus, for instance, and a conductor takes Rs.3/- without issuing the official 5-rupee ticket.  How would you address corruption at the lower rungs?

There is no fear of consequences today; a strong anti-corruption law like the Jan Lokpal coupled with swift and certain justice will bring about change. For a start, just the intent to fight corruption will bring about a change like that seen in Delhi.

Your party has come into prominence due to the anti-corruption movement.  The common man is so much used to corruption and in many cases a willing party to get his “work done.” How do you propose to handle the common man’s graft?

Most bribes in our country are paid by people who need to pay to get what is rightfully theirs; this is almost like extortion. If people know they can get their rights in a timely manner without having to pay for it, they won't resort to bribery.

How does your party propose to handle women’s security in the backdrop of recent atrocities?

Police reforms, self-help groups, and bringing a fear of consequences, empowering women, and implementing initiatives like training in self-defence classes for women.

The complexity of the socio-economic problems is so vast.  Is your “broom” big enough to remove the garbage?

Problems are many and complex; however, if you don't start, you will never be able to solve the problems.

Every parent wants his/her child to become a doctor, an engineer, or a software executive. How is AAP going to change this perspective that the feeling that a child can also become a politician arises?

We live in a culture where parents tell a child who does badly in studies or gets into trouble or fights, that "You are good for nothing, join politics!"  If more and more good people join politics, we will be able to make "politics a good word."

Do you subscribe to the view that a minimum educational qualification is a prerequisite to become a politician?

The common man does not know the candidates you have fielded in various constituencies. Is it rewarding or retarding?

Shortage of time and limitation of resources are a challenge we are facing. We are, however, committed to giving every citizen in the country a choice of choosing clean candidates over corrupt candidates.

Where do you see the progress of the AAP in the next 5 or 10 years in power or in the opposition?

This election is only the beginning. We hope to fight next year’s corporation elections on people’s issues. Our good work should help us form the government in Karnataka in 2018 and after that at the centre.

Any other message you wish to share with the common man?

We deserve better. In 1947, we chose democracy; let’s reclaim democracy. Power to the people.

Given the Indian political ambience, the voter is forced to vote for the less corrupt, as we don't have an honest alternative.  The Congress party is a major stakeholder when it comes to corruption, immediately followed by the BJP.  Show me the list of candidates who are taint-free. Often, the candidate and the party he/she represents are in conflict when it comes to integrity.  If the electorate is adamant to comply with strict parameters to choose the right candidate, the polling booths will display a pathetic empty spectacle.  All over India, the mood seems to be for change. The aam aadmi is tired of rhetoric and corruption. By the way, I came across a new meaning coined for bribe: anti-Hazare tax.

AAP is like a new coffee shop.  Initially, we expect the quality to be not bad.  Till such time the party become the rubbish bin (which certainly I don't wish for), let us not discard them in a hurry.  Options available are too little and, for the moment, I believe we should give them the benefit of the doubt. "Even if we get 40 to 50 seats at the national level, we will change the agenda to Indian politics," a humble Reddy said. The election may not propel AAP to power nor will Indian politics will be redefined overnight, but given the common man’s mood, the polls can teach something new to the aam aadmi. While there are very many things to be changed in our country, AAP's primary fight is to fight against corruption

Wishing you, Sir, and your dream of a corruption-free society all success!